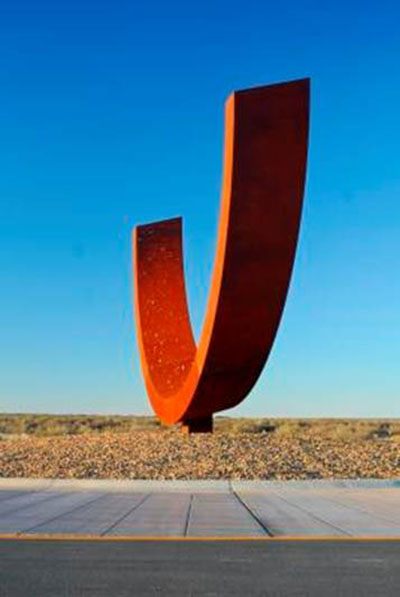 In the early 1990s, the Southwest Space Task Force formed to promote the state of New Mexico as a location to develop and FAA-approved spaceport. The Office for Space Commercialization was established by the New Mexico legislature in 1994, and in June of that year the parcel of state land that would eventually become the site of Spaceport America was identified. Legislation for the state of New Mexico to finance the spaceport passed in 2005, and initial launch operations began in 2006. The On-site Visitor Center is 4,000 square-foot facility where guests receive an immersive and entertaining learning experience about the next generation of spaceflight in a hands-on, dynamic environment, full of authentic opportunities to participate, learn and discover.

Art in Public Places of New Mexico Arts and the Local Selection Committee at New Mexico Spaceport Authority (NMSA) sought to commission an experienced public artist to participate as part of the design team for the public art project at Spaceport America. In collaboration with the design team, the selected artist would create integrated artwork for the On-site Visitor Center and/or the surrounding landscape.

Otto Rigan from Tucson, AZ was awarded the commission.

Otto Rigan is a sculptor who relishes working with others in design partnership and who prefers the challenge of responding to a particular context. Born in the Mojave Desert town of Muroc, California, having spent formative years on Roswell, adult years in Santa Fe, and as a lifelong resident of the American Southwest, Rigan felt a particular resonance with Spaceport America. Rigan spent his formative years growing up in Roswell, NM. He published four books about contemporary glass and alternative architecture while continuing the practice of his art through his twenties. He found his way back to working full time as an artist in Santa Fe and Pojoaque, NM. In 2006 he moved to Arizona where he now works.

"GENESIS", was chosen as it speaks of new beginnings. Spaceport America is the first purpose-built commercial spaceport offering everyone an invitation to space. Otto Rigan found his design precedent in the ancient astronomical architectural forms of Janta Mantar in Jaipur, India. Like Janta Mantar, this sculptural form frames space and implies an orientation to the stars. Within the open arms of the sculpture is a section of the night sky illustrated by imbeds of cast glass. The mirrored glass inlays are imbedded into the iron of the sculpture yet reflect the sky. As such the glass responds to the ever changing light of its environment: the time of day, the seasons and even the slightest light of the night sky. The sculpture is of the earth, and of the sky. In it, they have come together.