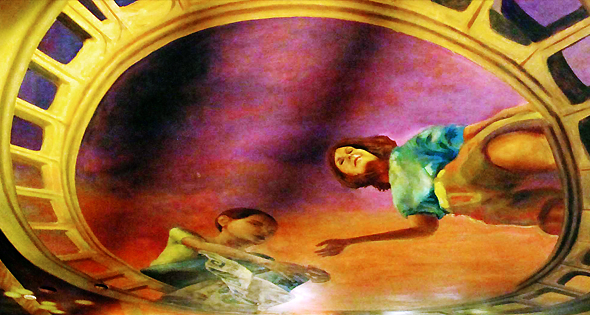 Mouse over the image to see another detail of the artwork from July 27, 2012
Photo credit: Heidi Frohnapfel, ASA Architects

The Center for the Arts will provide critically needed support for art, creative media, dance, music, and theatre programs at New Mexico State University and the region. The multi-phase project will cluster the scattered arts programs in one central location, encouraging more collaborative activity and providing the community more accessibility to creative endeavors on campus.

The phased development of the Center has been planned in collaboration with each department. It is based on the growth of the campus arts community, the needs of Las Cruces and regional community, and anticipated support and funding for construction.

The groundbreaking for Phase I of the project was held on July 15, 2010. Located at the corner of University Avenue and Espina Street, the Center for the Arts Performance Hall will include a 450-seat auditorium, classrooms, rehearsal space, state-of-the-art sound and lighting technology, and performer support space.

The Local Selection Committee (LSC) at New Mexico State University seeks to continue the tradition of integrated art that has been prevalent in enclosed theaters since Andrea Palladio’s design for the Teatro Olympico in Vicenza, Italy 500 years ago. The LSC is interested in commissioning artwork that enriches the architecture of the Center for the Arts Performance Hall, evokes a sense of splendor before and after large performances and supports intimate small group settings.

A site-integrated acrylic mural entitled Salida del Sol inspired by the rich landscape and history of Las Cruces, the transformative nature of the performing arts, and the relationship between performers and the audience, Saligman's artwork will be installed on the ceiling of the Center for the Arts Performance Hall and will be illuminated by eight custom silk pendant lights. The lights will be suspended on an electronic hoist system tied into the theatre's lighting controls, enabling the pendants to be lowered before and after performances and during intermission, making the public art piece a part of the experience of attending performances in this facility.

The ceiling mural will be complemented with a six-panel mural depicting an arroyo and desert landscape that will be installed on the thin vertical wall surfaces in the lobby of the facility entitled Salida del Sol: Arroyos.

Saligman's work has been placed in both the national and international realm of public art. In 2001 she completed a 30,000 square foot two-sided mural at the AT&T communications center for the Southeast in Shreveport, Louisianna, which is the largest publicly funded mural in the United States. She is the recipient of numerous awards including honors from the Mid Atlantic Arts Foundation, the National Endowment for the Arts, the Pennsylvania Council for the Arts, and the Public Art Network Year in Review.