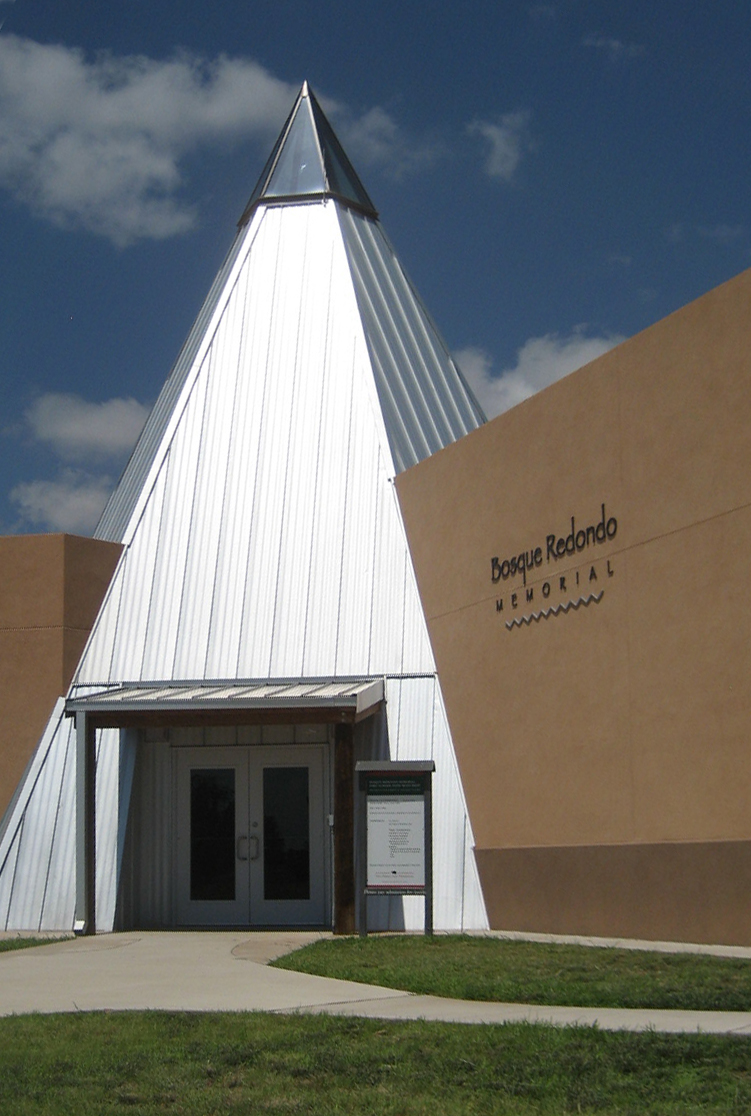 Each of the two residencies will be held over six (6) weeks and include comfortable, private lodging and an all-inclusive stipend of $14,000.

Artists are invited to create a presentable deliverable with a public component, including but not limited to, an exhibition, workshops, or performances for the community at the completion of the residency by sharing their art with the public while considering the cultural and local histories of the historic site and surrounding area.

A strong community engagement component that provides genuine enrichment must be considered in collaboration with the site. Site-specific works are strongly encouraged. Artwork should appeal to residents and visitors to the area.

Media must be safe for both children and adults, ADA compliant, and not leave a permanent mark on the environment when removed.

This button transfers you to the call for entry website:

The Bosque Redondo Memorial Historic Site preserves the history from hundreds of years of human occupation and activities, including American Indian and European American exploration, settlement, transportation, and trade with specific focus on the Native American experience.

The site is an official member of International Coalition of Sites of Consciousness.

The selected artist will have access to a fully equipped kitchen, laundry facility in the space, full modern bathroom with shower, bedding and towels provided, comfortable furniture and a non-working fireplace in the Casita. Gorgeous views and private areas with benches near the river for contemplation.

Internet access is provided in or near the Memorial. Even after closure, there are picnic tables in the back of the building that will allow internet access. The Resource Room can be used as studio, exhibition, performance, workshop and gathering space.

Shipping deliveries will be accepted on behalf of the artist in the Memorial building.  Artists may work in a solo capacity or with teams depending on the scope of the work. Any costs for outside support will be the expense of the resident artist and there is no additional space provided for any additional contracted team members.

New Mexico Arts has allocated $14,000 for each six-week residency to include all living expenses and project related materials. A comfortable onsite one-bedroom accommodation for the artist and a studio/performance/exhibit/workshop space within the Bosque Redondo Memorial.

Individual artists may apply. The local selection committee will select the proposal that best responds to the history and culture of the site and surrounding area. The public component will encourage respectful dialogue about the meaning and history of the site. The project amount must include all applicable expenses that the artist may incur while creating the artwork, such as materials, labor, living expenses, insurance, taxes, travel, installation, and community engagement.

There is no medical or workers’ compensation insurance provided by the State of New Mexico or the host site. Artists will be responsible for providing personal coverage. All selected artists will be required to enter into a Contractual Agreement with New Mexico Arts and the Host Site.

Proposed timeline is subject to change. Selection criteria used by the Local Selection Committee shall include, but is not limited to: Quality of concept, strength of proposal, quality of previous artwork, and proposed project’s attention to the culture and history of the historic site.

Against the political and historical backdrop of the American Civil War, a conflict focused mainly in the east, another tragic series of events was unfolding for Native Americans in the western territories of Arizona and New Mexico. From 1863 to 1868, Fort Sumner, New Mexico was the center of a million-acre parcel known as the Bosque Redondo Indian Reservation. The story of how the U.S. Army used scorched earth policies to forcibly remove Navajo and Mescalero Apache people from their traditional homelands to this lonely, inhospitable outpost along the Pecos River is pivotal to the history of the American West. The Navajo call this the Long Walk, when more than 50 different groups made the 300+ mile journey over a period of nearly three years. Several hundred Navajo captives either died during the walk or were abducted by slave traders. Gross acts of brutality included stragglers being shot and pregnant women killed if they could not keep up with the group. For the Mescalero, a historically migratory people who hunted and gathered freely in the mountains of the southwest, being rounded up, made sedentary on a single piece of land, and forced to ‘farm’ was in and of itself a form of cultural genocide. Confining members of these two disparate cultures together and pitting them against each other was another form of cruelty inflicted upon the prisoners.

During their internment, the Navajo and Mescalero were prevented from practicing ceremonies, singing songs, or praying in their own language. Daily depredations at the reservation were palpable on every level. Food rationing was both meager and completely foreign (coffee beans, white flour and rank beef), while the lack of wood for heating and cooking during the bitterly cold winters led to illness, and high infant mortality. When a smallpox-like disease was contracted from the military, it ravaged the captives. The suffering from exposure, starvation, and sickness took an estimated 1500 lives. In 1865, close to 350 Mescalero made their escape and returned to their sacred Sacramento Mountains. Nearly 1,000 Navajos fled but more than 7,000 remained.

This dark chapter in our national history finally came to an end in 1868 with the signing of a treaty and the return of Navajo survivors to their traditional homelands. While the treaty established the sovereignty of the Navajo Nation, it also outlined the oppressive conditions under which they would be bound, and forever changed the way they would live. The Mescalero Apache Tribe had a similar experience after they signed a treaty in 1873. The pedagogy of oppression employed throughout the US policies has reshaped their cultures on every level: mentally, politically, and spiritually.

In 2005, the New Mexico State Monuments Division and the Museum of New Mexico, with strong support from Navajo and Mescalero, created the Bosque Redondo Memorial. It stands today to acknowledge the events of the 1860s and to allow those affected by the history to have a voice to tell their history. Designed by Navajo architect David Sloan in the shape of a hogan and tepee, the museum and interpretive trail provide an exhibit and educational programs to visitors.