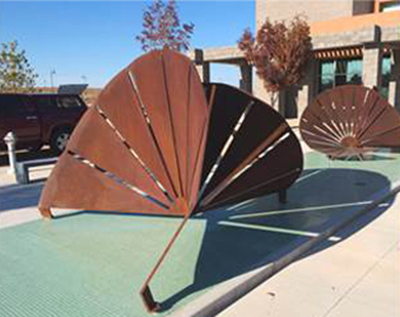 Rio Rancho (The City of Vision) is the largest city and economic hub of Sandoval County in New Mexico. A small portion of the city extends into northern Bernalillo County. It is the third-largest and also one of the fastest growing cities in New Mexico. The Rio Rancho area was originally part of the Alameda Land Grant, which was founded by the Spanish in 1710. By the early twentieth century, much of the land grant had been sold to land investment companies. AMREP Corporation purchased 91,000 acres in 1961 and turned the land into a housing development called "Rio Rancho Estates" with the first families moving in the early 1960s, most of whom were New Yorkers. Since the 1990s, Rio Rancho has taken steps to become more independent from neighboring Albuquerque, including the establishment of separate school and library systems and attempts to attract businesses to the area. The city's latest project is the Downtown City Centre development that includes a new city hall building, the new Hewlett Packard building, a new UNM West and CNM campus, as well as the Santa Ana Star Center Arena.

The Art in Public Places Program of New Mexico Arts and the Local Selection Committee (LSC) of the Rio Rancho City Centre sought to commission an artist or artist team to create a site-specific commission project. The LSC was interested in artwork that would invoke thought, engage visitors and staff of the City Centre and was distinct from art already placed in the area and that speaks to the future of this young (30 years) New Mexican City.

Don Redman, based in Santa Fe, NM, was awarded the commission.

Sculptor, Don Redman's education began on the water, in the building of ships with his father on the Gulf of Mexico. After art school technical training, the real education began with a series of apprenticeships that lasted ten years with three nationally and internationally-renowned sculptors. Redman has over three decades of experience using natural elements—water, as well as the sun, light, and wind (utilizing natural laws)—to connect the observer with space and movement. The mediums in his work have included stone, steel, stainless steel, aluminum, brass, copper, fiberglass, epoxy resins carbon fiber, paper, and wood. A highlight of his career was serving as Artist-in-Residence for the Georgia O'Keeffe Estate (1995-99). Redman has many artistic achievements that stand out as great examples of conceiving and delivering sculptures for the public to view.

"Sun Mask" features two Corten steel structures that resemble inverted seashells with slits cut into them. The Corten structures sit atop a base of 1-inch, light blue, emerald glass tiles that create the illusion of a reflection pool with water. The open spaces and conical shape of the structures provides an endless variety of shadows that are projected onto the tiles. The shape, angle and placement of the shadows depend not only on the time of day but year as well. The sun creates movement around a static piece.