New Mexico Arts continues its partnership with the Navajo Nation Museum on an exciting and unprecedented public art collaboration as part of the state arts agency’s cutting edge TIME (Temporary Installations Made for the Environment) program. A milestone of the Art in Public Places (AIPP) program occurred last year when Ai Weiwei, Chinese dissident artist, collaborated with Bert Benally, a Navajo artist, to create Pull of the Moon, a temporary land-based sand art installation in remote Coyote Canyon on the Navajo Nation, and our most recent TIME project.

Due to the temporal nature of Pull of the Moon, it was captured for the AIPP program on 3D film by xRez Studios and then reconfigured and projected onto a mobile geodesic dome that was first installed on Museum Hill’s Milner Plaza in Santa Fe, which attracted nearly 1,800 visitors in one weekend in July 2014. This immersive, interactive dome is believed to be one of only three and New Mexico Arts was the first state arts agency to own one.

Our dome traveled to Miami and was exhibited at a city park during the internationally renowned Art Basel in December 2014. As part of the Indigenous Dome Project, Native American artists Tony Abeyta, Kenneth Johnson, Battiest brothers, and Yattika Star Fields created new pieces for the dome that were premiered at Art Basel Miami. We are in ongoing discussions with the famed Heard Museum to install the dome on their campus in Phoenix, Arizona, in 2016.

The goal is to share the extraordinary Pull of the Moon immersive experience with as many people as possible. As a result, one of our most temporary installations becomes one of our most impactful due to this innovative approach of sharing it with the public. 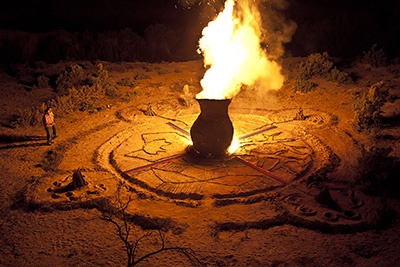 New Mexico Arts also is able to show some of the Pull of the Moon content on its cutting edge Oculus Rift glasses, which we obtained prior to their market launch in 2015, and which we unveiled to the public at the State Capitol on Culture Day during our 2015 regular legislative session. Pull of the Moon signifies the transformative power of art through international collaboration and is a reminder of the immense challenges faced by many cultures and the capacity for growth and healing from very impactful events. 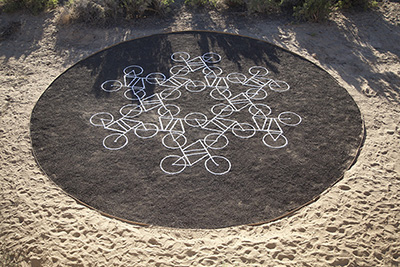 New Mexico Arts sees this project benefiting Navajo Nation and New Mexico through expanded press coverage and increased arts-based economic development and cultural tourism. The division hopes to increase exposure for Navajo and other Native American artists living on the reservation who produce quality contemporary art but lack outlets for exhibition and sales. New Mexico Arts also features film footage and a television commercial made for Pull of the Moon on its new promotional flash drives, which are aimed at building connections with younger and more tech savvy audiences.